makings of a great day

You know it's going to be a great day when... 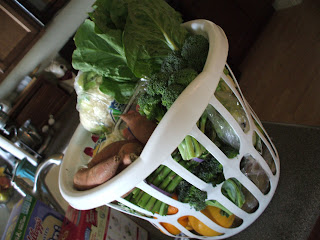 You get all this produce for $15 (check it out bountifulbaskets.org) 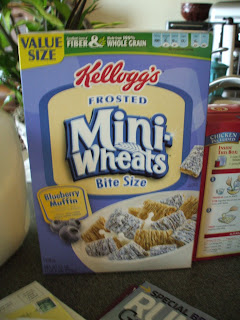 Blueberry muffin mini-wheats? Where have you been all my life? 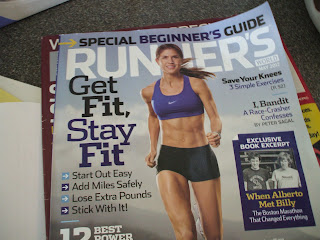 You have a new magazine in the mail! And you know it's going be amazing when the cover says "Save Your Knees," and has rock hard abs on the cover. 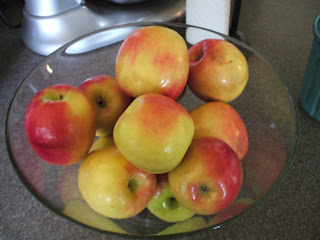 Pink Lady Apples are in season; Best. Apples. Ever. 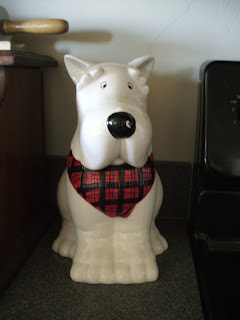 Frank, the cookie jar, is chilling in the kitchen while you do some hard core baking. 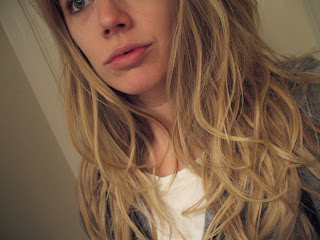 Waking up to a great hair day, without doing any work. 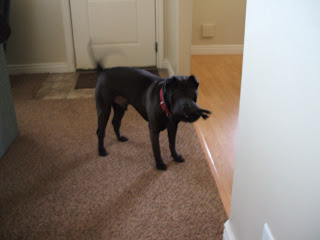 Your dog is pumped to hang out with you and always wants to play.

Are you watching LDS General Conference?
I am.  I think these gentlemen are pretty darn special.
Posted by Tiffany at 9:53 AM 1 comment:

Sometimes you are just too hungry to wait for dinner to cook.
So you can make dinner in five minutes
or you can go to McDonald's
you choose.

This is what five minute dinner looks like at our house: 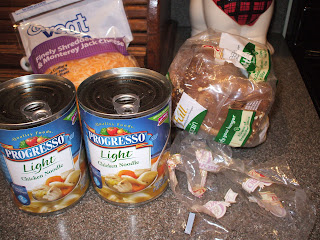 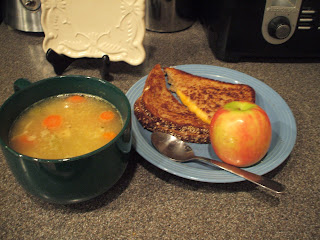 this literally took about 5 maybe 6 minutes to cook
Apparently that still wasn't fast enough because I ate a bunch of cadbury mini eggs and pretzels dipped in peanut butter while waiting for those 5 minutes to pass!
Posted by Tiffany at 10:02 PM 1 comment:

So I don't know about you, but whenever I eat chicken salad at a wedding, bridal shower, baby shower, party, etc. it's like I just can't get enough!  I love it so much I want to marry it.  There, I said it.

So this is how I make mine:

boil 2 chicken breasts (20 min) and shred
(most recipes say canned chicken, but boiling your own is way cheaper)

boil 2 cups of bow tie noodles
(or not if you leave the noodles out you can make sandwiches out of them, but who has croissants on hand? not me, plus again I went for cheap and these are super cheap)

cut up:
celery, grapes, apples, and pears
(Lee says, "Leave out the celery," because he hates it, but I say, "No way Jose you need that crunch.")

Then, and most importantly, you can't just use regular mayo.
You have to use olive oil mayo, trust me.  It will change your life. 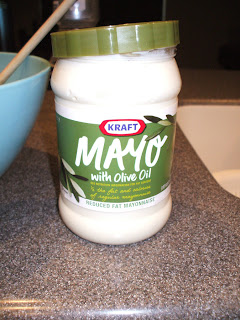 PS: This needs to chill before being served AND make sure you hide the leftovers because if I am there it will be gone in less than 24 hours. No Joke.

We ate it with sides of pineapple and wheat rolls.

Happy Cooking!
Posted by Tiffany at 10:09 PM No comments: 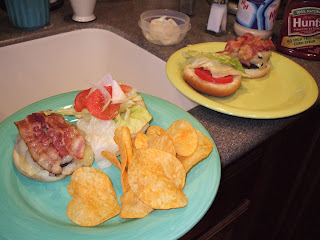 Last night we got inspired by the 60 degree weather.
So we went for a classic summer meal: hamburgers on the grill.
Super healthy? No.
Super tasty? yes.

And that's all I have time to write tonight because apparently being OCD and cleaning my entire bathroom on a random Tuesday night at 9:00 PM is more important than blogging.

having a bad day?

For me Monday was a bad day

I called Lee to vent. 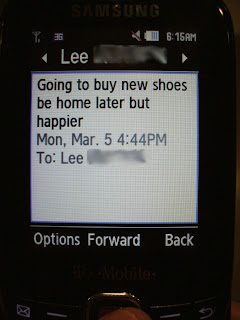 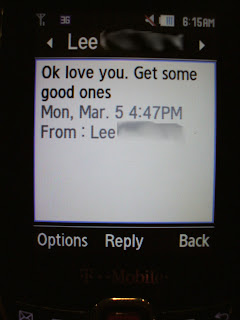 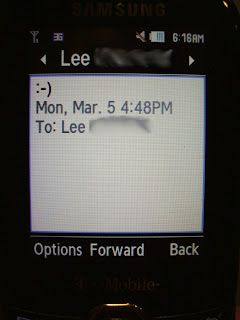 Posted by Tiffany at 6:06 AM No comments:

This is probably the easiest recipe in the world, even though the sauce is homemade (sort of).
I remember one year {I was about maybe 9 years old} my friend and I made this dinner for my parents on their anniversary and pretended to be waitresses and served them by candlelight
(in the laundry room of all places and at a card table)
Random.
Adorable right? Well, it was my friend's idea, but you get the point.
I mastered this recipe at an early age. 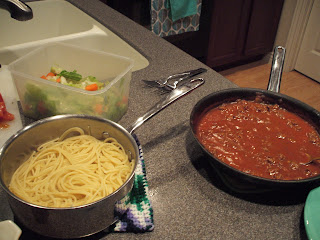 Spaghetti, sauce, & salad. Easy peasy.
We usually do garlic bread too, but that's just too many carbs for me to comfortably eat
and we didn't have any white bread in the house.
Wheat garlic bread is not tasty, take it from me. 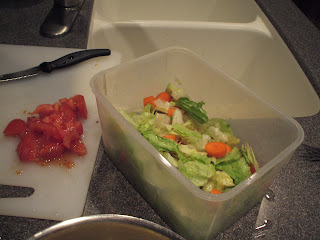 First cut up your veggies, if you can't do that, you are in trouble.
I keep my tomatoes separate in case there are leftovers, tomatoes will wilt your salad quick. 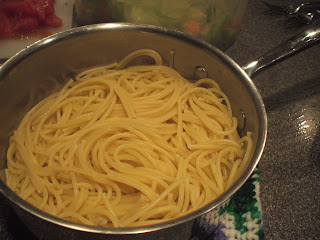 Boil your water.
Add your noodles.
Don't overcook them.
Some people say throw one against the wall and if it sticks or something it is done?
I don't know. Google it.
I just say, "Lee come eat a noodle and tell me how they are doing."
I like them overcooked, he doesn't, therefore this is his job. 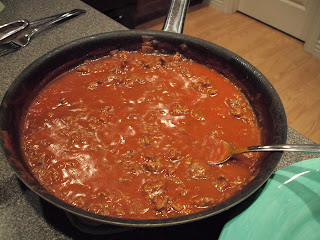 *SECRET* (jk mom) Recipe
First, sautee some onions in butter.
Then you brown hamburger meat.  I usually only do 1/2 lb and freeze the other half, but pictured above I did the whole thing.
Next you pour in a can of tomato soup (I always use Campbell's), 1 tbsp(ish meaning 1 or 2) of ketchup, and about a 1/2 cup of water.  I say about and -ish because it depends on you and you can't really mess it up.
Now this is my own step (not part of the original recipe)
which is why I say it's only sort of homemade.
At this point I like to dump about 1/2 bottle of some premade spaghetti sauce just to give you some veggies and seasonings without any work.

Lastly, I cut up some nummy cantaloupe.
Just for a little something sweet and juicy.
We didn't eat it with dinner, but about 15 minutes later. 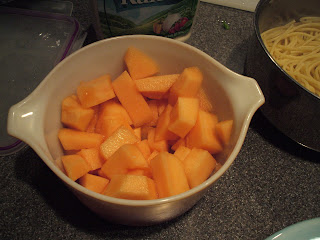 If you are doubtful as to the deliciousness of this recipe, just know that my brother-in-law was over at our house once during dinner with spaghetti on the menu and he asked me how I learned to be such a good cook.

I'm like it's spaghetti? How hard can it be?

You may or may not have heard, but I am going to run a marathon.
That is 26.2 miles.

Sometimes I when I think about it I get really excited.
Sometimes I get sick thinking about it.

But mostly, I know I can do it.
Because of people like this:

I posted this on facebook a couple of months ago after reading about this guy in Runner's World magazine.  Even though I've seen it several times, I still find it completely inspiring.

Especially that last line.
Posted by Tiffany at 3:27 PM No comments:

good-bye to this month for lovers 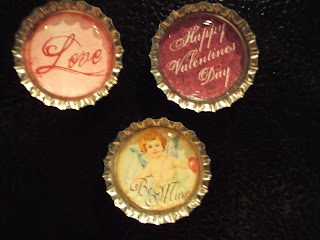 goodbye lovely magnets from the antique treasures mall...
on second thought maybe you can stay a while longer 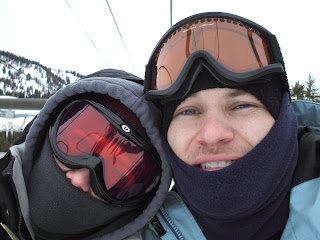 good-bye snowboarding adventure, we probably won't make it out again this year 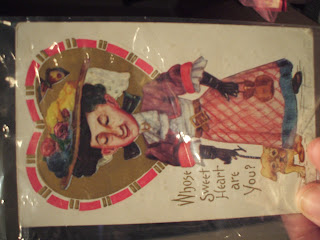 goodbye silly postcard, time for you to go into my secret shoe box of treasures
I guess boys do listen (sometimes) when you tell them your hopes and wishes
the best part of this sweet card is the back.
There is a message (in cursive) that says:

Dear Hazle,
How are you feeling?
I just passed into the last part of
the Third Grade.
GOOD By-
from, Francess 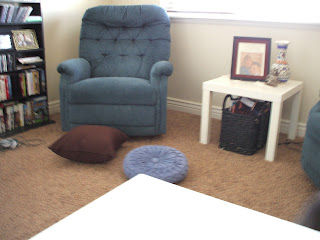 Biff wants to say good-bye to our new throw pillows,which he shows me when he spends ten minutes trying to get them off that chair because (in his mind) that is his spot and the pillows are in the way.
They are something we won't be saying good-bye to. 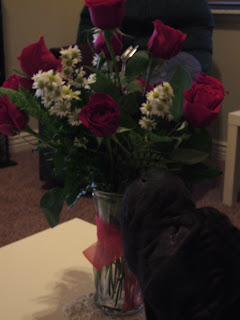 good-bye flowers
dear lee: you are right, they are too expensive, and they don't last very long,
but my memory will last forever.
thanks.

The last thing we said good-bye to this month was my sweet grandpa.  I remember there was a time during my high school years when I lived under the same roof as this grandfather.  I can recall many times when he would ask where his loving companion (my grandmother) was.  We would sadly remind him that she was no longer with us.  I believe they are together again now.  How appropriate for them to be reunited in this month for lovers.

Do you believe that those you have loved will be with you after passing?
I do.  This is why.
Posted by Tiffany at 6:23 PM 1 comment: