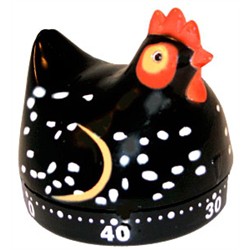 Lately there is this Campbell's soup commercial advertising using their soups for your green bean casserole and the commercial is filled with adorable kitchen timers and the thing is I must have one.   It's really been getting me into this holiday spirit of cooking and being all domestic and using adorable timers, only I don't have one.

But this year all of this Thanksgiving feasting may just be wasted on me, because today, I might be sick.

The thing about being sick on Thanksgiving is that it sort of ruins things.  I have been coming down with a bug since Monday that makes my back tired and my stomach gurgly (and no I am not pregnant so I don't even ask, and especially don't ask if you say prego because I did not turn into spaghetti sauce).

The thing about Thanksgiving is that you are supposed to be grateful for everything in your life and eat too much food and play board games and get ready for black friday shopping.  But this morning I am sitting here with the Macy's parade on the tv, only I never really liked watching it anyway, and I am trying to summon the courage to eat a bowl of oatmeal.

That is really quite pathetic.   I take it as a bad sign that I am not even hungry because usually by 6 AM I am awoken by the rumbling of my own stomach screaming for food.   Once I eat breakfast that is really the turning point when I will know if I will be going to dinner or not.  If the oatmeal makes me sick then dinner is out, if not dinner is in.  I think you can see why this is so frightening.  Also, being a foodie, Thanksgiving is probably in my top two holidays, with Christmas obviously being in the number one position.

What I really want to do is go running, preferably for a good 7-10 miles, only they'll be nice and slow because lately I am not so fast.  Afterward I'd take a shower and get myself a diet dr pepper.  If I really am still sick none of this can happen, except for maybe the shower, but without running it's not even really necessary.

I even thought about going out for black friday this year.  I really want a sewing machine, only I haven't done enough research about what I want or what a proper price should be so I don't think this would happen sick or not.

"I could make that"

One of my biggest pet peeves when I was a kid was how my mom would often say, "I could make that."

Example: Me: Look at that cool shirt/blanket/furniture/anything.
My mom: I could make that.


This drove me batty.  If we're being honest she rarely ever made it, but the thing is, it stuck in my head.   She was right, oft times things that you could end up spending a lot of money on are things you could make yourself.   Sometimes I hear myself not really saying it, but thinking it.  Some day we all turn into our mothers.

So here's some stuff I made lately. Forgive the horrible pictures, my camera apparently has forgotten how to focus photos.  If I take 5 pictures of the same thing, one might be in focus.  So just saying sorry in advance.  Time for a new camera, since mine apparently is going through alzheimer's.

These are some jeans I never wear because they are "too flared."  I am not a skinny jeans only girl, but if the flare of the leg touches while I walk it bugs me.  I am not trying to make a tutorial on how to do this and I cannot find the one I used, but here's another.

Basically I put them on inside out, pinned them the way I wanted them to fit, took them off, drew a line with a sharpie of where my new seam would go and sewed along the line.

PS: I do not have a fan and a hammer in the floor in my bedroom this is one of our spare rooms which I have taken over as a sort of craft room. Hey, look that one was actually in focus. I also got this sign at the DI for $1.50
Sorry if you are a fan of the original, but I painted the red edges black,
took off the decal and slapped a new one on. PS: I got this vinyl statement at Wall Written.
My friend's sister-in-law owns the company and they had an amazing clearance sale the other day.

Do you ever catch yourself doing something (mimicking a parent) that you swore you would never do?

Christmas came early.  I just found something at Savers for $9.95 that I was pricing on Ebay for anywhere from $30-125! Before I show this amazing item I have some others to share.  Keep in mind (if you've never been thrifting before) that the items I am showing you I collected over multiples trips to the DI/Savers.  Before we begin I wanted to share my rules for thrifting.


1. If you don't find at least one thing, you are either not being creative enough, are not in the right mood, or you are going too often.
2. If you are buying more than 5 items you are probably just buying crap.
3. If (I like it and) it's 5 bucks or less it's mine.  If it's $10 or less it's probably mine.
4. Never, never, never go on Saturday.
5. If you want it and it's relatively cheap you should buy it because if you don't buy it someone else will.  If you come back tomorrow it will be gone.

Here are some great finds; some of the prices I don't remember so I'll be guessing. And last the best of all the game.... 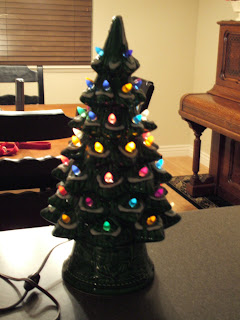 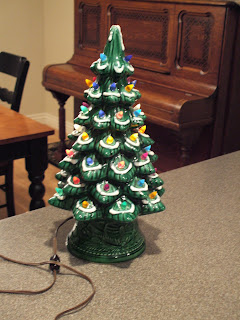 My amazing ceramic Christmas tree! I was in love with one my grandma had when I was a little girl. Just look them up on Ebay and you can see how pricey they can be.
Posted by Tiffany at 7:05 PM 1 comment:

I painted my bedroom furniture, bought a new comforter set and a new hamper, and if ya ask me it looks pretty darn good.  It did not turn out according to the plan/the way I picture it in my mind, but does anything ever? 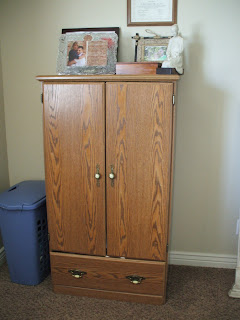 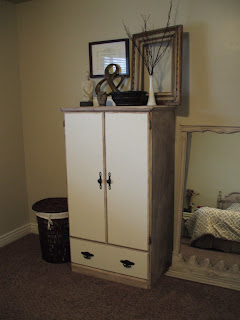 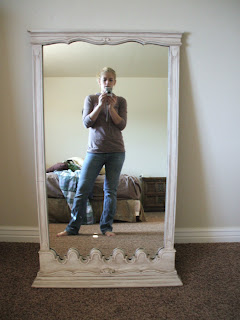 $5.00 Mirror that inspired me. I guess I forgot to take a before of my nightstand but you can see it in the background (sorta). 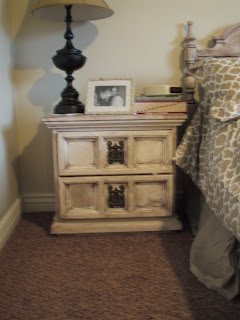 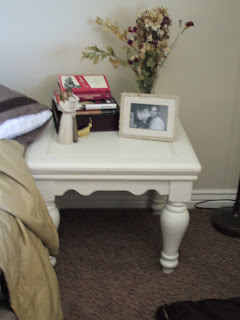 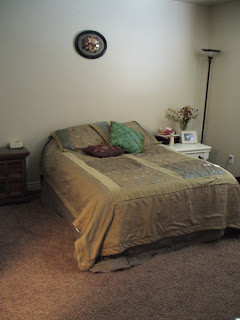 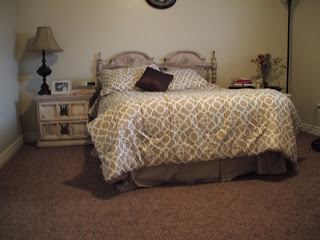 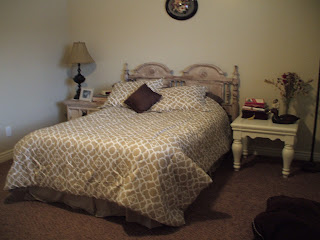 After all was said and done it didn't turn out how I thought it would, but I still like it.

My tips for painting furniture are as follows:

1. Do not skip steps! Steps should go: 1. Prep/Sand 2. Primer 3. Paint
2. Using a glaze or stain does NOT work out on furniture that is not made of real wood.
3. Yes, there is such a thing as awesome primer to help you prep laminate furniture and/or prep furniture without sanding, but it is CRAZY sticky and that is why it works. Here is a picture of my brush I tried to soak in hot water and vinegar to clean it.  Notice how the sides of the bucket are painted. Yeahhh I painted the bucket from underwater.  Be careful with that stuff. I saw these great pictures on pinterest and it linked back up to a simple how to.

Unlike the other site, I did not take pictures of the project in progress, just the final project.  Since I bought four frames for this I decided to do one for each season.  I was being drawn again and again to autumn and winter silhouettes so I forced myself to include the summer and spring pictures.  This was so easy, but I did ruin one of my DI dictionary pages trying to send it through the printer.  They were very thin so I glued them down to a piece of paper to keep it from jamming the printer. 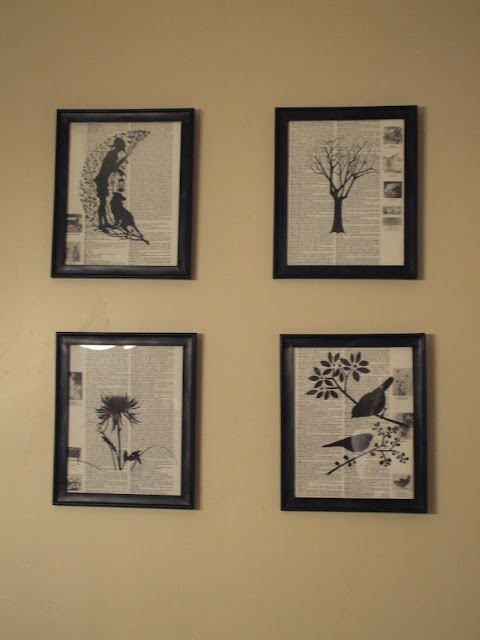 I found these little gems recently and they begged me to take them home. 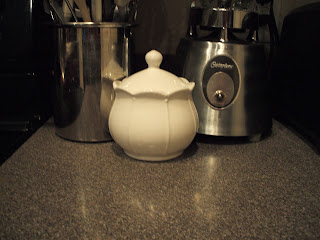 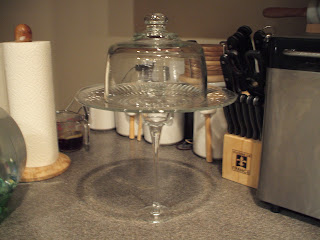 I actually made this cake plate/platter with a candlestick and a plate and some E6000, but watch out that stuff is toxic! Yikes! The topper/cover was $3.00.
Posted by Tiffany at 8:04 AM 2 comments: