getting rid of the tacky

A while ago I bought some ugly floral pictures at the dollar store. I kind of liked the brown one, I didn't like the yellow one, but I bought them anyway. I hung them up and I knew I wanted to change them somehow. I originally wanted to try to give the yellow one a brown tint, but then I had a better idea.  I didn't know how to do it and I still wasn't sure I even liked the brown one.

Here is an awesome before picture of the bathroom, also note it is a picture I found on my camera of Lee taking his own before and after pictures of his beard.  Ha! He may or may not be mad when he sees it here. 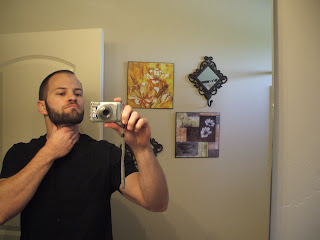 I took the pictures down... 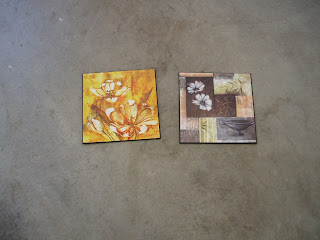 I sanded the pictures off, which turned out to be decals/stickers.  When I realized they were stickers I  used goo gone to get the rest of it off. That stuff is amazing.  Add a little paint, add a little painter's tape, and this is what you get. 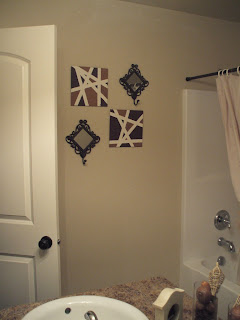 Much better!
Posted by Tiffany at 7:56 AM