Warning: This is the longest post ever. It's about running. Only.

Well, it's been 7 months since I ran the marathon back in June.  In some ways it seems like yesterday, in other ways it feels like it was an eternity ago.  I really don't know why I've put off posting about it forever.  I have been thinking about running quite a bit lately (aren't I always though?).  Since I am pregnant now, my running has (obviously) changed.

The first trimester I was so tired I would have to take walking breaks every mile. In the second trimester I feel the need to take potty breaks every mile (but I never really have to go?).  I finally solved this problem by doing push ups between each mile to get rid of that feeling since going to the bathroom actually did little to help.  Yesterday I finally had a great day of running for more than 5 minutes (actually 40 minutes!) without feeling like I had to run straight to the bathroom.

So far, I am not really 'showing,'  just lookin' a little pudgy so I haven't had to deal with any unsolicited advice from strangers that my baby will fall out due to my running or something crazy like that, but in case you are worried about me (or any other pregnant runners) just check out the American College of Obstetrics and Gynecology's website for their recommendations on exercise.  Which if you are too lazy to read is: to do it (exercise)! For 30 minutes every day (at least)! AND that if you ran before pregnancy you can generally continue to run throughout pregnancy (as long as your pregnancy isn't high risk) So there ya go, but really if you aren't a doctor you really shouldn't give out medical advice anyway, but that's just my feeling.  So you should talk to your doctor about what's right for you and I will continue to do the same ;)

So back to the marathon; I have been thinking about running and how I am really going to miss out on all of the races this year! Which to me, is sad.  Especially because I was planning on winning some... No that's a joke, I am as slow as molasses.  I was going to say especially because I remember the first thing I thought when I finished the marathon was, I can't wait to do that again!  So I can do it better! Okay, maybe it was 2 hours, 1 nap, and a trip to Arby's later.  Needless to say, I knew I wouldn't be doing it again for a while (if I was lucky) since this was a planned pregnancy.  Knowing we were planning to make room for baby in our life didn't stop me from wanting to run a marathon again though.

So since I won't be running a marathon this year, I wanted to write down what I learned from my training and the race day so I can do better next time.  If I don't write it down, I'll just make the same mistakes again.

While training for the marathon I kind of fell in love with speed work and I realized that my regular pace that I run at is kinda too easy for me, I could go harder and faster and I loved it.  It felt great.  I thought, "Why would I run my long runs so slow if I want to run my race fast? Shouldn't I get used to running fast?"  To me, this sounded like great logic.  All the books and websites say, run slow on long runs.  I poo poo-d that real quick and moved on with my own way since I was exploring my pace and what was fast or slow for me.  This is what basically killed my race and killed my time.  The longest run on my training schedule was 20 miles.  I had every intention of doing all my long runs outside.  Then I got shin splints.  And at that point all the long runs after about 13 miles got put on the treadmill.  I know right?  So I'm on the treadmill, obsessed with my newly discovered ease at running faster and pushing myself.  A real comfortable pace for me (maybe too comfortable) is 6.0 MPH, so the books say stay there or slow it down beyond that, but I was pushing it up to 7.0 MPH.  In fact, I ran my whole 20 miler at 7.0 MPH on the treadmill (at the gym, watching UP! twice, kill me now).  I did this partly because of my new need for speed and partly because a friend asked me to meet her for lunch and I felt like I couldn't turn her down so I was cramming the run in as fast as I could so I could go to lunch with her.  So the 20 miler took me about 3 hours.

Here's where the problem is:  My longest run was 20 miles and it took me 3 hours.  Even if my race day went fabulous and I ran the first 20 miles in 3 hours I'd still have about another hour of running to do beyond that point (4 hours of straight up running).  There is a BIG difference between 4 hours of running and 3 hours of running, at least to me.  If I had run slower, my 20 miler would have taken me longer and better prepared me for the TIME running versus the MILES run.  Next time, as much as it kills me and bores me, I will run slower at least on the very long runs.  A longer (time) run would've better prepared me mentally and physically.

This goes back to my messed up 20 miler.  It's okay to ditch out on an outing with friends or family once or twice to fit in your training.  I can see how this can annoy your friends/family if you are constantly in training for a marathon, but you're probably not, I'm not.  So if you occasionally have to say, "No, it's not going to work for me today, I have my training."  They should forgive you and be supportive.

I did my long runs on Saturday.  Saturday was the day I did grocery shopping and chores.  This made for rough going and exhaustion.  Get other people to help out more, or rearrange your schedule to make sure you get what you need to done, hopefully on another day.

3. Don't miss any runs, but don't freak out if for some reason you do.

I didn't have any issues with this, but I probably would have freaked if I missed a training run.  If I wrote it in my planner it was going to happen.

1. Don't wear new gear.
Everyone says that.  I wore new pants, it wasn't a tragedy or anything, but the waist band wasn't tight enough and I felt like my pants were falling down the whole time.  No bueno.

2. Do talk to others/meet new people.
A marathon has such a great environment.  Head phones are great and music can really help you make it through rough points (Hello, cue a few glistening tears during Kelly Clarkson's 'What doesn't kill you makes you stronger." LMAO!) but it's also great to talk to others and find out where they are from, how they trained, is this their first race.  Everyone is so nice and encouraging.

3. Do wear your wedding ring.  Awkward....
I never wear my wedding ring when I work out.  When I weight lift it literally hurts my hand, when I do cardio, I am paranoid it is going to fly off my hand and I won't notice and will never find it again.  So running the marathon I just thought it was safer to leave it at home.  As I already mentioned people are really nice and talkative at the marathon.  I think it's rude not to chat when people try to chat you up so I talked to a lot of people.  If it naturally came up that I was married I mentioned that, but I didn't want to say, "Hey, just FYI, I am married!" every time a man said anything to me, because that felt arrogant as if I assumed they were talking to me because they thought I was attractive.  Well, needless to say, I got myself a little stalker during the race. I don't even know how long he ran with me, probably at least 6 miles.  Off and on; he kept finding me again. and again. and again. The whole I'm married thing, never came up naturally.  Then it became clear it needed to.  Oh dear. It was pretty funny, sad, and awkward all in one.

4. Maybe you are like Deena Kastor or something, but if you are just a regular joe like me, nothing can really prepare you to run the marathon except to do it.
I felt like I heard comments like this a lot. And it drove me crazy.  I also heard that 20 miles is the first HALF and the last 6 miles are brutal.  I didn't believe this going into it and I don't think it has to be true, but it was for me.  As I mentioned, I really messed up my training by running too fast and the last 5 miles were truly brutal. 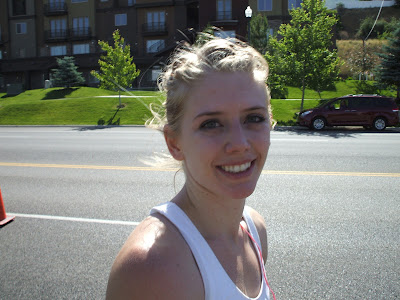 Me at mile 21; feeling great before I "hit the wall" pretty sure a more accurate expression is
"a truck hits you!"


5. Don't start too... slow?
Everyone will give you the advice, don't start out too fast.  I took that advice way too seriously. Which made no sense to do given the way I trained.  I started too slow.  I could have come out running under a 10:00/mile pace for the first chunk at least, but I tried to go slow to 'save my energy' but for me going slow used up more energy because it took more time, which I already mentioned, I wasn't prepared to run the time, even though I was prepared to run the distance. 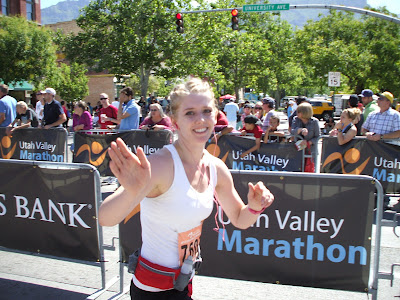 The marathon was a great, wonderful, amazing experience.  Sometimes I felt like I would be defeated by it, but I wasn't.  And I honestly think anyone can run a marathon, anyone that's crazy enough to want to that is.

I can't wait to do it again, probably in the summer of 2014 if all is well.  I wasn't even sore the next day! That is one MAJOR sign for me that I could do it about a million times better.  For now, I'll be in training for labor and running for fun.

Ah, thank you...loved reading it. That all makes sense...I'll see how it goes for me. What training plan did you use?

Tiff you are an inspiration! I ran a half marathon once and it took me 5 months (literally) to recover. My crapping knees and not training sure did screw me up. Also, you can totally keep running while you are pregnant!! Since you did it before hand your body is already used to it. I heard a whole bunch of junk about continuing to dance even though I was pregnant. So I say more power to ya!!

You are awesome! And seriously can we have more on the conversation about the stalker and the fact that you were married? I am so hoping for more. LOL.